Unfortunately, the data is 3 years old. I am really not sure why it can’t be more up to date with today’s technology.

As I have done for the last couple of years I have made a chart comparing the Perth Metro hospitals c section rates against each other and against their previous years.

It is a really good picture to have if you are deciding on what hospital to birth at.

I find people are very surprised when they realise just how high the c section rates are in the private sector compared to the public sector.

Obstetricians will tell you it is because women are older, smarter and requesting more c sections in the private sector. But the research doesn’t support this.

The research also doesn’t support that private hospitals are safer for our babies either.

This 2014 research by Hannah Dahlen found that:

“For low-risk women, care in a private hospital, which includes higher rates of intervention, appears to be associated with higher rates of morbidity seen in the neonate and no evidence of a reduction in perinatal mortality.”

So what do the latest figures show us?

Have a look for yourself.

Things that stand out for me are:

It’s a shame Attadale closed. They seem to have been doing going in the right direction.

What is going on at Glengarry? Why has their rate gone up nearly 10%?

At least Murdoch is consistent 🙁

It will be really interesting to see the data for Joondalup HC Private, Peel HC Private, Midland Public Hospital (which is run by SJOG) and Fiona Stanley Hospital.

It is really important to remember that these rates are the hospital rates.

It is still really important to ask your obstetrician what his/her individual rates are.

I wonder which hospitals would be proud to hang this on their walls? 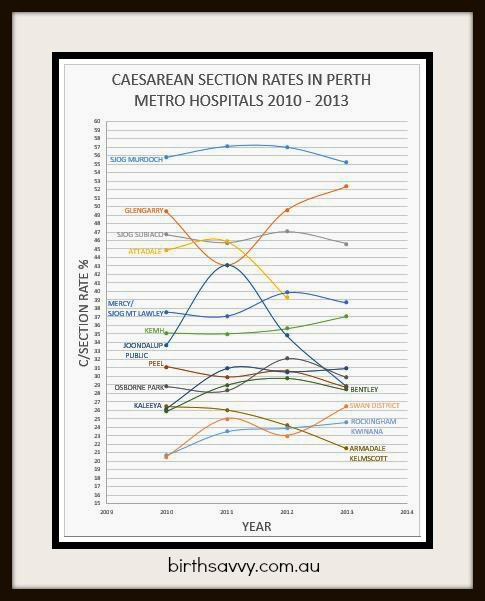 In this next chart, I have put the spontaneous vaginal birth (ie natural birth), induction and c section rates together as I think it gives a great picture as to where you are the most likely to have a natural birth.

Again I would love to see it hung up somewhere, maybe in GPs’ rooms?

A spontaneous vaginal birth means going into labour when your baby triggers labour, not being artificially “sped up”, and no forceps or vacuum deliveries.

The data only looks at head down babies, for some reason, but does include multiple births if the first baby is head down.

Those of you who are mathematically inclined might notice that the overall numbers for each hospital might add up to more than 100%. I think this is because inductions can end up as c sections so get counted twice. 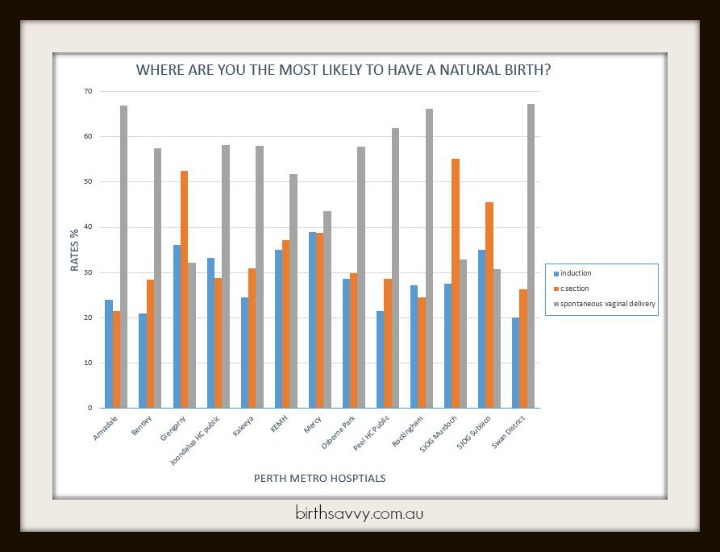 Finally, as I always say, it is important to understand the system you are choosing to birth in, but it is equally as important to know how not to become a statistic.

With education and confidence, you can birth well in any setting, you just need to know what to ask for.