Here are the latest Perth cesarean section rates and induction of labour rates from WA Health. They are the latest although they are still only the 2011 rates.

Countries such as the US are trying to reduce their cesarean section rates as they think 33% is way too high. Our private hospitals are around 50% and no-one seems to be doing anything about it.

Obstetricians argue that it is because women are older. However the research suggests that women in their 30s and 40s are 22% more likely to have a cesarean section. So what accounts for the other 35% at SJOG Murdoch? It is interesting to see that the 2 top hospitals for c-section have the 2 lowest private hospital induction rates. Does this mean they jump to a c-section rather than aim for a vaginal birth?

As I always point out, these are hospital stats. They are an average of all the obstetricians. Some obstetricians will have much lower rates, but some will have much higher rates. It is really important to find out what YOUR obstetricians rates are. In NSW this is publicly available, unfortunately in WA they are not. So you will have to  have the confidence to ask your doctor.

Recovering from a major abdominal surgery with a newborn is really hard going and to be avoided unless absolutely necessary. 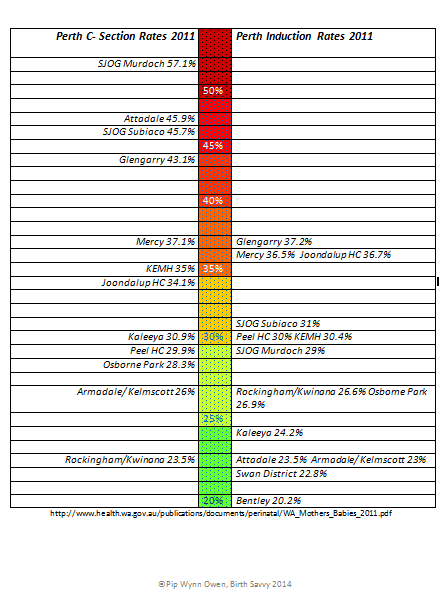