As always I wonder why there is a 4 year lag on reporting the data, and how different the actual data for 2019 would be?

You can look at a summary of the overall WA induction and C/section rates from 2010 to 2019, but we have to wait 4 years to find out the individual hospital rates and we never find out individual obstetricians’ rates.

Anyway, I have added the 2015 c/section rates in Perth and Rural WA data to my (almost) yearly graphs.

It makes for interesting viewing. 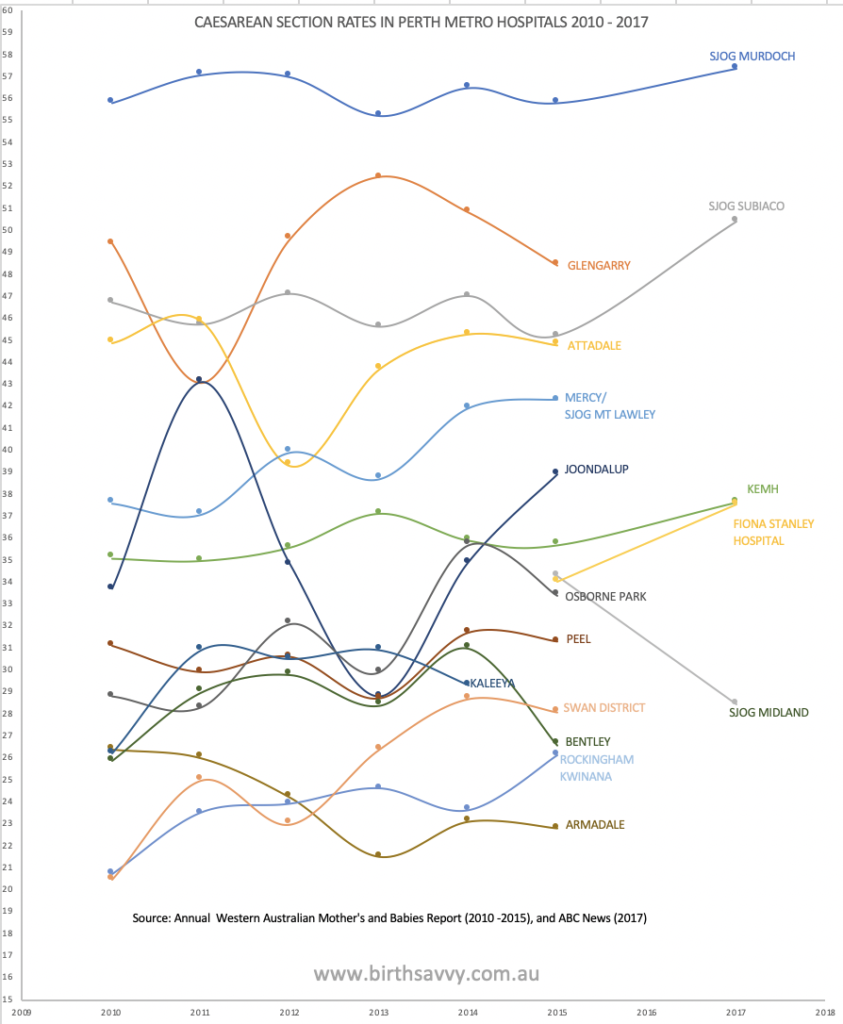 It looks like most hospitals had a reduction in their c/section rates in 2015. With the exception of SJOG Mt Lawley, Joondalup and Rockingham. I do have to wonder why Joondalup had such a sharp rise and also why they combine their numbers for public and private births.

SJOG Midland is interesting. It opened in November 2015 when Swan District closed. It certainly opened with a bang. But from the 2017 data, it looks like it sorted itself out.

Another thing worth remembering is that all these rates are too high.

“At the population level, caesarean section rates higher than 10% are not associated with reductions in maternal and newborn mortality rates.” (WHO)

Another thing worth knowing from the summary page is that inductions have also increased from 2010 to 2019 by 6%.

The report does look at the reasons for c/section from both “emergency” and “elective” c/sections.

If you look at the chart of reasons you might conclude that the biggest reason is “maternal choice” at 86.7%. This is probably why people will argue that the reason c/section rates are rising is that women are choosing them.

To work out how many women actually chose an elective c/section you need to do the Maths.

Interestingly the total percentage of women who had an “elective” c/section for “other obstetric indications” is 10.9%. And given the extensive list of obstetric complications already mentioned, I do have to wonder what these are.

Could this suggest that 10.9% of elective c/sections are for “caregivers choice”?

Could we say that more c/sections are performed for “caregiver choice” than “maternal choice”?

Of those women choosing elective c/section, I do always wonder if these were informed decisions or were they decisions made out of fear? Or worse still, did women “choose” a c/section because they weren’t given any other option?

With “elective” c/section for a previous c/section, I wonder if women were given a balanced discussion on the risk and benefits of VBAC. The same with “malpresentation”. If that was a breech baby, did their care provider offer them a vaginal breech birth? And don’t get me started on “suspected fetal macrosomia”.

The word “elective” really offends some women because in hindsight they realise they weren’t given a choice.

By far the leading reason for an “elective” c/section is a previous c/section at 59.9%.

We could debate whose choice this really was, but it does mean we have a clear starting point if we want to reduce c/section rates: prevent the first c/section.

This is something they have been trying to do in America since 2014 when ACOG (The American College of Obstetricians and Gynecologists) published their guidelines for the Safe Prevention of the Primary Cesarean Delivery.

It would be great if we had something like this in Australia, however, there is nothing stopping Australian women reading this and asking their care provides to follow these guidelines too.

Another great initiative to lower c/sections was the three-part Lancet Series on Optimising Caesarean Section Use published in 2018. This is a great publication for expectant couples to read and discuss with their care provider.

You can have a look through it HERE

I will keep my eye out for the release of this year’s report to update my graph with the 2016 c/section data.

Finally here is the graph for regional hospitals in WA. I would love to hear what SJOG Geraldton was doing to have a rate of 19.2% in 2015 and whether they are still doing it. 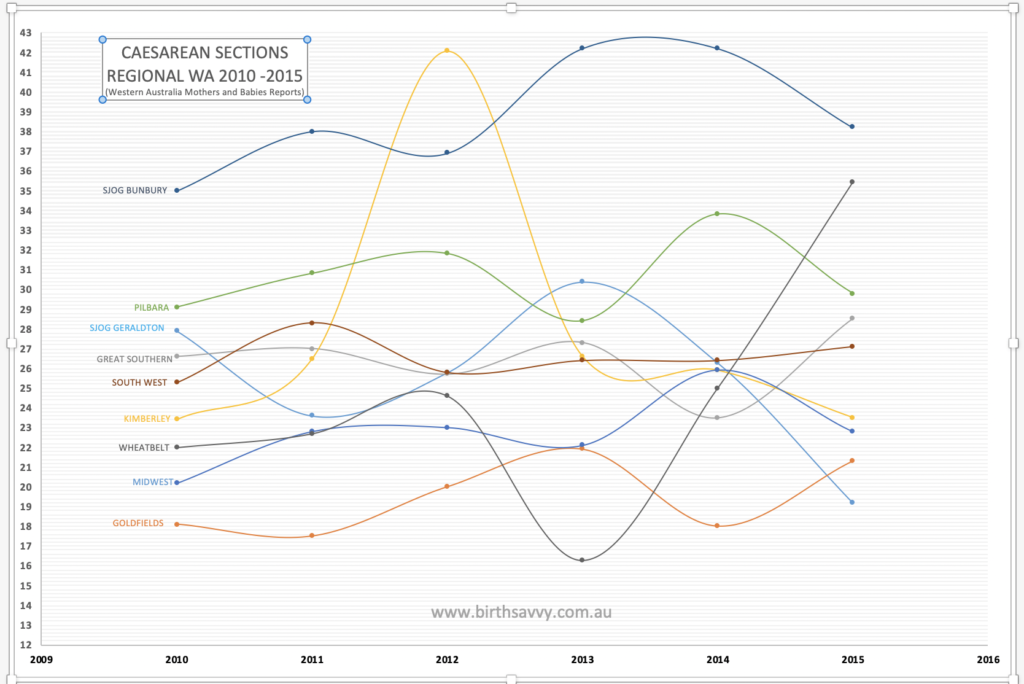